"No thief likes a full moon.  Like mushrooms and owls, they do their best work in the dark."  The first lines of Loot by Jude Watson set up a fun heist adventure that will keep you on your toes as you follow the twists and turns through an engaging mystery. 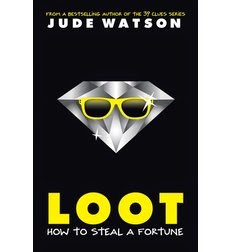 March McQuin's father Alfie, an infamous jewel thief, taught his son all the tricks of his trade while adventuring the world, and they always had each other.  But, when his father slips off a building during a robbery gone bad and dies, March loses the only family he has ever known, and he is truly alone.

Alfie McQuin's dying words were to "find jewels," so March sets off to find his last big score.  He soon realizes, however, that "jewels" is not the fortune he is expecting, but is actually his secret twin sister, Jules and their reunion begins an adventure neither of them planned as they search for seven mysterious moonstones, originally stolen by their father many years ago.  They are pursued by a dangerous thief who will do anything to grab the gems first, and they also must stay a step ahead of an ex-detective with his own agenda.

Peppered with useful hints to be a successful conman -- "Never trust a guy who says, "Trust me."  Never give your real name to a cop.  Never let someone steal your getaway car." -- Alfie's advice is engaging and provides the background for March and Jules' dangerous adventure.

Jewel heists, betrayal, greed and loss mix together with a familiar story about family ties, friendship and love.  While the criminal knowledge and experience of these twelve year olds is a little unsettling, their independence and persistence make for an entertaining adventure.  There are certain scary elements (hooded men chasing the kids through dark streets, fight scenes and death) that skew the story to a slightly older audience.


Loot: How To Steal A Fortune
by Jude Watson
published by Scholastic Press
June 2014
recommended for ages 10 and up
Posted by tara at 1:00 AM 1 comment: