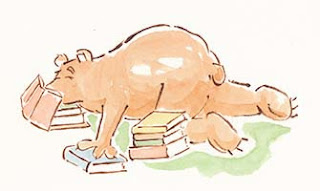 Aaah.  I had a terrific time participating in the Cybils as a panelist for the Easy Reader and Early Chapter Books categories.  You can see the finalists for all the categories on New Year's Day on the Cybils site. Check it out and happy reading!
Posted by danyelle at 1:00 AM No comments: 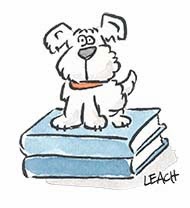 One final list of the year . . . our favorites.  In creating this list, we indulged ourselves by allowing personal interests and experiences to influence our selections.  These are books we love, and we recommend them wholeheartedly.

Poetry:
Folktales/Fairy Tales:
Posted by danyelle at 1:00 AM 1 comment:

Email ThisBlogThis!Share to TwitterShare to FacebookShare to Pinterest
Labels: best of 2013, danyelle, tara

We are a week away from the year's end, and now is a good time to see which books you missed in 2013 that you'll regret not reading.  I posted links to some of my favorite year-end lists in November (here and here) but there a few more that are worth noticing.

Posted by danyelle at 1:00 AM No comments:

Today is the last day of school this year (cue the applause) and yesterday was the last storytime of the year. Here are December's highlights.

We had a big snowstorm in Utah, so it was the perfect day to read

We talked about playing in the snow and enjoying hot chocolate afterwards.  One student pointed out the change in the city from gray and drab to bright and colorful in Snow.  And another noticed the changing colors in Big Snow as the story (and the storm) progressed.  We talked about how the snow reflects the light and how the illustrations use light.

We continued our discussion of cold weather and snow by reading
We looked at the texture in the illustrations for Bunnies on Ice and Extra Yarn.  We also talked about the magic behind that box of yarn--every kid had a slightly different idea of how it worked.

We talked about Christmas.  We read
Jon Agee's Little Santa ends with "And you know the rest of the story."  I had several students who wanted to share what they know about the rest of that story.  (And one who wanted to know if the book was fiction or nonfiction.)  I love first graders.
Posted by danyelle at 1:00 AM 1 comment: 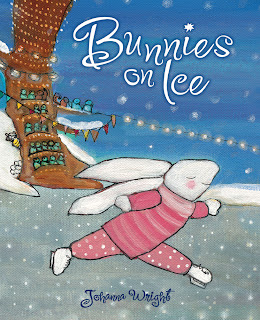 Bunnies On Ice is a charming story about a little bunny who is eager to share her secrets of how to be a "champion" ice-skater.  One of these tips include waiting for "the conditions to be just right."  That means waiting through spring and waiting through summer and waiting through fall - until finally, it snows!  After a big breakfast and a proper wardrobe change, it is time to hit the ice.

This little bunny shows off her incredible skills, such as doing "a figure eight with [her] eyes closed" . . . but, as with any supremely confident child, her perception of greatness is slightly exaggerated and the pictures tell a much different story (her figure eights are a mesh of messy squiggly lines and her perfect landing ends in a fall).  But, after a hard day on the ice, she has her "excellent support team" and "plenty of hot chocolate," which makes the perfect ending to this cozy winter story.

The best part of this book, (aside from the spunky main character and perfect family togetherness), is the art.  The pictures make you want to touch the pages because of the heavy texture of the canvas and the visible brushstrokes.  You are almost fooled into thinking you can feel the raised canvas and paint under your fingertips - and even though you can't (believe me, I've tried), the pictures are still warm and magical.

If you missed this book earlier this year, I highly recommend you pick it up and enjoy the sweet story and delightful pictures.  (If you want to do it while sipping a cup of hot chocolate, that wouldn't hurt either.)

Bunnies On Ice
by Johanna Wright
published by Roaring Book Press
January 2013
Recommended for ages 2 and up
Posted by tara at 1:00 AM No comments:

danyelle recommends Me Too by Valeri Gorbachev 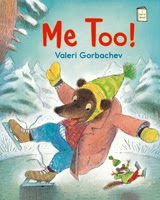 Some of life's best moments are simple ones, yet they can also be elusive because emotional richness and simplicity can be difficult to capture simultaneously.  That is why I particularly admire a book for emerging readers, like Me Too! by Valeri Gorbachev, that captures an everyday moment and imbues it with depth, and does it in a way that is easy to read.

This story begins on the title page with an eager Bear and Chipmunk watching the snow fall outside their window and welcoming readers into their world.  Then with a page turn, readers are drawn inside the warmth of their home.

This first page sets up the rest of the story with Bear talking about their activities and Chipmunk echoing, "Me too!" each time.  The picture of snow shovels (I love the tiny one!), ice skates, and skis lined up on the wall also gives readers a preview of what is coming next.

The two friends dig a path out of their house, make a snowman, ice skate, ski, and return to their cozy home to sit by the fire. Young readers will laugh as Chipmunk flies through the air behind Bear's snow shovel, when he skis down a hill and lands head first in the snow, and when he and Bear fall on their backs while skating.  And they'll understand the warmth that exists between the two friends.

After a day in the snow, Bear and Chipmunk tuck into their warm beds, and this time Chipmunk's echo changes.

The moon in attic windows draws the reader's eyes across the page, and with the final page turn, the reader is once again outside looking at the glowing lights through the window.

Unlike traditional easy-to-read books, this book is the shape and size of a picture book which makes it perfect for the earliest reader and an adult to share together.  The repetitive text  uses only 39 unique words (most of which are sight words).  Expressive, watercolor illustrations tell the story, and children will probably "read" the story through the pictures more than words.  There is nothing complicated here, just a satisfying story simply told.

I received a copy of this book from the publisher for consideration as a Cybils Finalist.

The opinions expressed are my own and do not necessarily reflect those of other Cybils panelists.

Me Too!
An I Like to Read Book
by Valeri Gorbachev
published by Holiday House
July 2013
Recommended for ages 4-7
Posted by danyelle at 1:00 AM No comments: 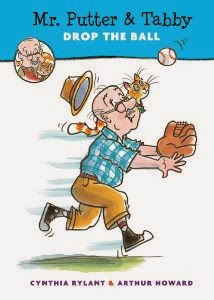 I've come late to the Mr. Putter & Tabby books by Cynthia Rylant.  For some reason, until recently, I had not read even one book in the series.  Yep, that’s almost 20 years and 22 books, and even though I've taught six of my children to read, I had, somehow, missed every book.  Until now.

When Mr. Putter & Tabby Drop the Ball was nominated for a Cybils Award, I picked it up expecting (unfairly, I might add) a rather stale, late-in-a-series story.  I was surprised and delighted to find just how wrong I was.  Deciding that I had neglected this series long enough, I took a quick trip to the library and checked out a stack of books.  Now after reading through eight books, I've found new characters to love and old books to share.  Although I enjoyed all the books I read, Mr. Putter & Tabby Drop the Ball is still my favorite.

Mr. Putter and his “fine cat” Tabby love to nap, but they seem to be napping all the time, so Mr. Putter decides they need a sport.  His neighbor, Mrs. Teaberry knows of a baseball team that will be just right for him--the Yankee Doodle Dandies--and when Mr. Putter expresses concern about being too old, Mrs. Teaberry offers to join the team with him.  They arrive at the ballpark, leave Tabby and Mrs. Teaberry's dog, Zeke, on the sidelines, and take their places on the field.  But Zeke doesn't want to be a spectator, so despite being told to “stay,” he runs onto the field and grabs the ball.  Just when it seems like Zeke’s mischief will cause the Yankee Doddle Dandies to lose, he finds a helpful way to be part of the game.

Told in five short chapters, this book is just what an easy reader should be.  Short sentences with easy-to-read vocabulary (most of which newly independent readers will recognize) are surrounded by plenty of white space.  Repetition in the text creates rhythm and familiarity.   Personality-filled illustrations with bold lines and bright color help pace the story by alternating between spot art and double-page spreads.  And they add detail--check out the trading cards at the end of the book.

But the best thing about the book is that it is funny.  Glimpses into Mr. Putter’s thoughts make Zeke’s antics comical, largely because of Mr. Putter’s silent predictions.

Illustrations like those of Mr. Putter covering his eyes in exasperation (“Mr. Putter couldn't watch.”) or standing helpless with the ball on the ground in front of him (“Mr. Putter tried to bend down.  But his knees said, No way.”) contribute to the humor that makes this book engaging.

Hats off to you, Ms. Rylant for putting well-loved characters into a fresh, new story.

I received a copy of this book from the publisher for consideration as a Cybils Finalist.

The opinions expressed are my own and do not necessarily reflect those of other Cybils panelists.

I love this book. It is a really melodramatic book that shows getting braces and growing up in a way that only a graphic novel could show.

Raina is an eleven year old girl who trips and knocks out her front teeth. She then goes from "dontist" to "donist" as they try to figure out how to fix it. The problem is, she is just a normal teenager, she is having friend problems, her body is changing, and she is having boy drama. Things keep going badly until her sophomore year when her braces come off, and she gets new friends.

This book is based on true account from Raina Telgemeier's teenage years, and it is funny especially if you have had, or currently have, braces. She puts the sounds, the pain, and the embarrassment of having braces in the book. One of my favorite parts is when she is getting her mold for her teeth, (You can see those pages here.) and when she gets her braces off. If you have ever been a teenager, you see it through her all over again as you experience heart break, friend loss, and braces with Raina.

And, you can see the first part of the book where she trips here.

Smile
by Raina Telgemeier
published by Graphix
February 2010
Recommended for ages 11-14
Posted by Diane Reeder at 1:00 AM No comments: