Why Fall May Be my Favorite Season

Tomatoes are ripe, the weather has cooled down, pockets of red and orange are emerging on the mountain outside my window--it's almost time for pumpkin pie.  And just in case you need more reasons to celebrate fall, let me give you three:

First, two of the best children's literature blogs are back in session.  At Heavy Medal,  Jonathan Hunt and Nina Lindsay look closely at Newbery contenders with ooh-I-wish-I-would-have-written-that posts.  Their commentary is smart and thoughtful, and the comments provide a great forum to join the discussion.  Calling Caldecott considers possible Caldecott contenders.  Check it out to discover titles you may have missed, look at some the year's best books in a new way, and add your own two cents to the discussion.

Second, the National Book Awards announcement yesterday of their longlist for Young People's Literature started--albeit unofficially--the awards season.  Finalists will be announced October 14th and the winners will be announced on November 18th.  Mark your calendars.  Meanwhile, I am just waiting to get my hands on a copy of The Thing About Jellyfish.

Finally, the Cybils Awards will begin accepting nominations October 1st.  Put together a list of books you would like to see recognized and get ready to nominate.  (Rules are found here. Nominate here.)

Laura Amy Schlitz is a talented writer and I am always excited to read her new books because of the unusual stories and well-developed characters.  I was hooked when I finished The Night Fairy and I continued to be impressed by Splendors and Glooms, as they invited me into unique new worlds with details I hadn't experienced before.  Her newest story, The Hired Girl, takes a more traditional twist and is set in the 1900's.  While the setting is more familiar, this Americana romance explores some interesting issues of religious diversity, family ties and class distinction, all while embracing the foibles and resilience of human nature. 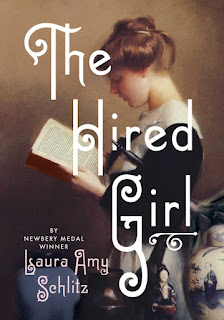 14-year-old Joan has not had an easy life, a life made even more difficult with the death of her doting mother and the cold resentment of her father.  As the only woman on her father's farm, she is forced to leave school and become solely responsible for the cleaning, cooking, washing, gardening, mending and chicken tending.  Her life is basically one of servitude and she longs to fulfill her mother's dream for her and become a schoolteacher, a wish not likely to come true under the hatred of her father and the heavy drudgery of farm work.  She takes courage, however, after her father burns her beloved books and reveals all the ugly things he feels about her, and she runs away to become a hired girl.

A kind stranger takes her off the street and, after changing her name and lying about her age, she is given a job in the Rosenbach's home.  In this new household, she must work hard to please Malka, the old family housekeeper, and to learn all the strange new rules of a Jewish family.  She also must navigate her emerging feelings toward Mrs. Rosenbach, kind but often disapproving, Mr. Rosenbach, who takes her under his wing, and their three children.  The developing story shows her mettle, while also highlighting her youth and lack of relationship experience.

Written entirely in Joan's journal entries, each passage is incredibly detailed, so much so that when dialogue is presented it feels more like a traditional first person narrative.  The combination of styles works, but the length of almost 400 pages and lack of white space skews to an older audience.  Fans of historical romance will appreciate Joan's girlish fantasies and the compelling characters and attention to detail is engaging.

Review copy received from publisher.
Posted by tara at 9:52 AM No comments: