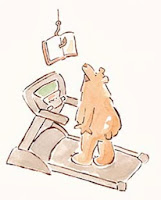 Lately, most of the time that I apportion to my book habit has been spent reading books for the Cybils, but I have taken time to peek at the year-end lists.  I mentioned Publisher's Weekly's list a couple of weeks ago, and now Kirkus has published the Best Children's Books of 2013.   School Library Journal announced their choices for the year as well:  SLJ Best Book 2013 Fiction, SLJ Best Book Nonfiction, and SLJ Best Books 2013 Picture Books.

I am thrilled to see If You Want to See a Whale on all three lists.  Some of my other favorites from the year that made all three lists are Flora and Ulysses by Kate DiCamillo, The Thing About Luck by Cynthia Kadohata and Locomotive by Brian Floca.  Both On a Beam of Light and Penny and Her Marble are on two lists and The Adventures of a South Pole Pig is included on SLJ's list.

My biggest disappointment was not finding Jonathan Bean's Big Snow or Joyce Sidman's What the Heart Knows on any of lists, but the year isn't over yet, and I'm crossing my fingers. My biggest surprise (because I hadn't heard of it until now) is Rooftoppers by Katherine Rundell.  I'll have pull myself away from early chapter books and easy readers to read it.

That's my reaction, what's yours?
Posted by danyelle at 9:28 AM 1 comment:

Email ThisBlogThis!Share to TwitterShare to FacebookShare to Pinterest
Labels: best of 2013, cybils, danyelle

The air is crisp, we've seen a few snow flurries, and the mountains are capped in white.  It is time to pull the fall, winter, and holiday books off the shelf.  Here are November's storytime highlights:

We talked about small things with these stories:


First, I have to say that I love The Tiny King.  The "Big Princess" makes me laugh every time I read it.  I was a little nervous to use Mr. Wuffles in storytime, but my book club friend, Krystal, convinced me to give it a try with her great alien voice.  I read the first couple of pages, and then I took volunteers to read and "interpret" each of the other pages. 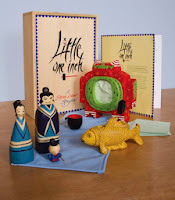 I told Little One Inch using the wonderful storybox created by Steve Light. You can find it here.  And even better, scroll down the page and watch Mr. Light tell the story.  (If you are looking for Christmas gifts, these boxes are fun for storytelling and for play.) 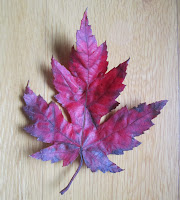 The last leaf fell from our red maple tree, and I took it to storytime to share with the children as we talked about fall and Thanksgiving.  We read


The children were excited about the upcoming holidays.  One little girl enthusiastically shared her story of visiting "Yew York . . . Nuew Nuork . . . you know, where they have that parade on Thanksgiving!"
Posted by danyelle at 5:00 AM No comments:

This is the time of year when my lists outgrow post-it notes and start to fill full-size sheets of paper (and sometimes, notebooks).  I have to-do lists, holiday preparation lists, ideas-for-gifts and wish lists, and of course, to-read lists.  But my favorite lists are the end-of-the-year book lists.  I like finding good books that didn't show up on my radar during the year and reading about what other readers love.

With just over a month until year's end, some great lists are starting to pop up.

Elizabeth Bluemle of ShelfTalker has put together a list of books that received starred reviews in major publications this year:  The Stars So Far--Updated.

The New York Times published their choices for the 10 Best Illustrated Children's Books of the year.

And if you just can't get enough lists, check out Heavy Medal (don't skip the comments), Calling Caldecott, and A Fuse 8 Production for more great book recommendations.

Email ThisBlogThis!Share to TwitterShare to FacebookShare to Pinterest
Labels: best of 2013, danyelle

tara recommends The Lord of Opium by Nancy Farmer

The House of the Scorpion sets up an interesting world with a powerful drug lord at the helm.  In this first book, Matt is a clone that was created as spare parts for El Patron (a very old man whose life is perpetually extended by utilizing his many clones).  At any given moment, Matt could be wheeled into the hospital and his story could be over and because of this uncertainty, there is a healthy amount of suspense and action as he navigates his relationships. 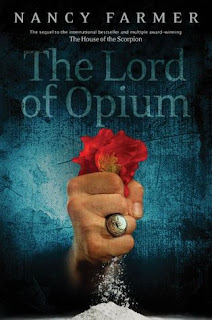 The Lord of Opium begins with a much more powerful Matt as he takes over The Land of Opium, becoming the new drug lord.  He is the only one with power to open the border and allow opium to be distributed to the other drug lords.  In fact, because of El Patron's tight-fisted control, Matt is the only one with power to make any changes or communicate with the outside world.

He is also faced with the high moral responsibility of fixing the eejits (most of the people in the land have injected microchips in their brains - turning them into virtual robots).  A 14-year-old Matt must now decide whether he will take over as a powerful, ruthless dictator, or find a way to make things right - and every choice is made harder because he is forced to trust dangerous people with questionable motives.

Because of the slightly different dynamic of this book, it was not quite as spellbinding as the first.  The pacing was a little slow at times, as Matt navigates the politics and mechanics of his new life and explores his kingdom.  That being said, this is a worthy sequel to The House of the Scorpion with new, compelling characters, old friends and a neatly wrapped up ending to Matt's story.

The Lord of Opium
by Nancy Farmer
published by Atheneum Books for Young Readers
September 2013
Recommended for ages 14 and up
Posted by tara at 1:00 AM No comments:

diane recommends Goldilocks and the Three Dinosaurs: As Retold by Mo Willems 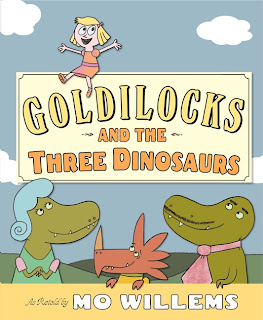 This book has been out a while, but I really like it, and after reading it several times to my laughing siblings, I decided that I should blog about it.

The plot is about what you would expect, except it isn't--the same Goldilocks, but with a twist.


"Once upon a time, there were three dinosaurs: Papa Dinosaur, Mama Dinosaur, and some other Dinosaur that happened to be visiting from Norway."

Yes, that is right, no Baby Dinosaur. And, Willems manages to get children's wording and thoughts correct:

Even the moral at the end of the book makes everyone laugh. You can read it several times without getting bored because the pictures have little details that may be skipped on a first, and even second visit. I love the pictures, and, if you look really carefully, you can find the pigeon at least once in the book.

Goldilocks and the Three Dinosaurs: As Retold by Mo Willems
by Mo Willems
published by Balzer + Bray
September 2012
Posted by Diane Reeder at 1:00 AM 1 comment: