A Resolution (and a Story) for the Lunar New Year

Things have been awfully quiet around here lately, but I'm still here and resolving to get back to more regular posting.  Today is Chinese New Year and the perfect day to share a Chinese story, so share this story (adapted from the Record of the Warring States) or a favorite of your own. 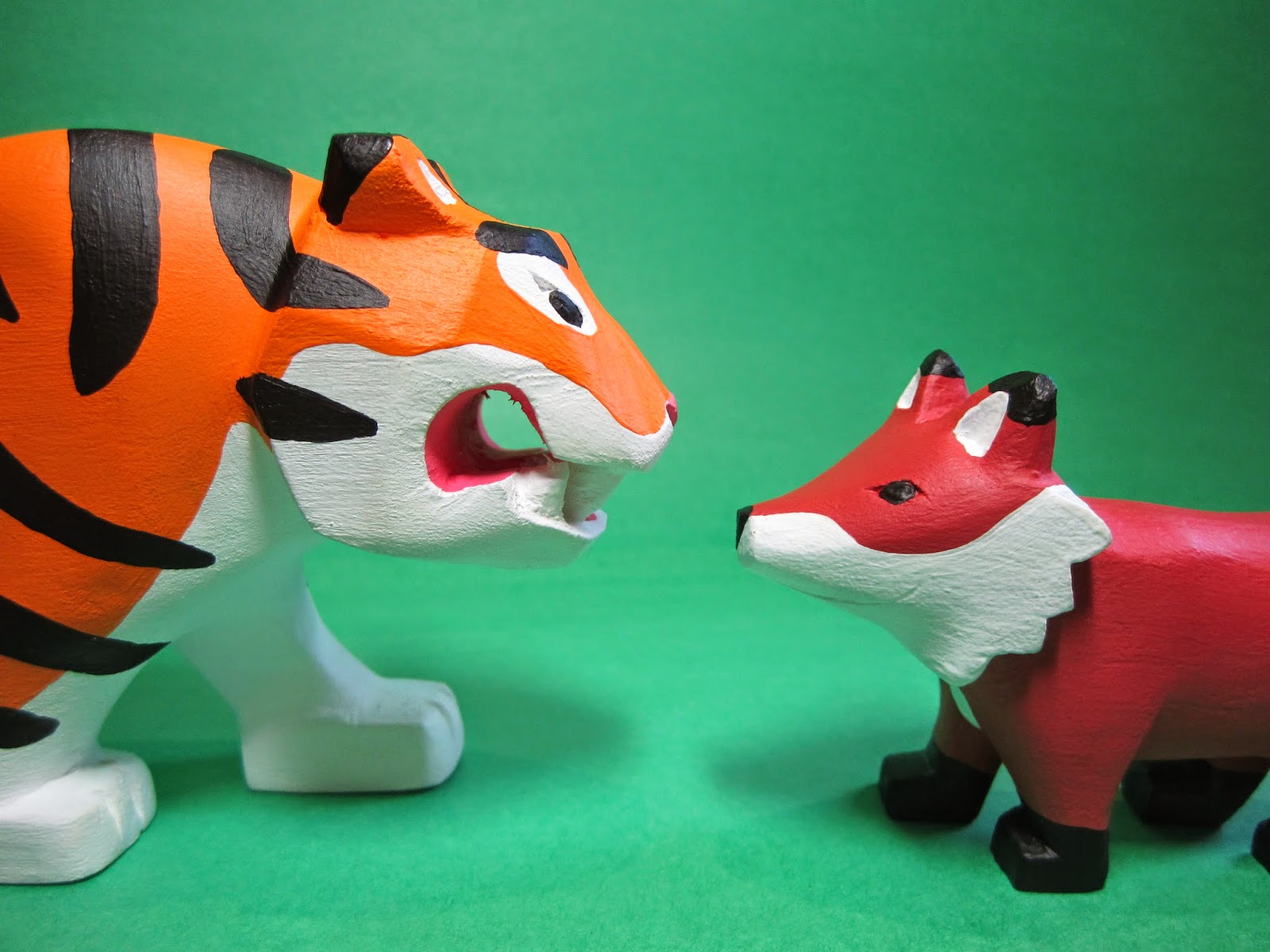 The Fox Borrows the Tiger’s Fierceness

Tiger was hunting in the forest when he spotted a fox just walking around minding his own business.  Mmm, thought Tiger, that fox looks like he would make a tasty snack.  And springing with his powerful legs, Tiger pounced and caught the fox under his large paw.  Fox knew he was in grave danger, but not wanting to be someone’s dinner and being very clever, he thought quickly.

“How dare you attack me!” he cried.

This caught Tiger by surprise, so instead of sinking his teeth into Fox, he asked, “Why shouldn't I enjoy a little snack?  I caught you fair and square.”

Fox made his voice a little louder and a little bolder and said, “You have no right to kill me!  I am king of the forest.”

Tiger laughed, “You? King of the forest?  You are nothing more than a scrawny creature--how can you be king of anything?”

Fox was ready with his answer.  “I will prove it to you.  Walk with me in my forest, and you will see how frightened all the animals are of me.  Then you will know that I am king of the forest.”

Now Tiger didn't really believe that Fox was king of the forest, but the little fellow spoke so loudly and so boldly that Tiger wanted to see how the experiment would go, so he released Fox.  Then, Fox, holding his head high, proudly walked deeper into the forest with Tiger right behind him.

After they had gone a short way, Fox called, “Hello!” to a rabbit that was munching on grass.  The rabbit caught sight of Fox (which was frightening enough), and then he saw Tiger following closely behind.  The rabbit’s eyes grew wide, and his ears began to tremble, and he hopped quickly away into the long grass.

Of course that little rabbit would run from Fox, Tiger thought.  Fox would eat him if he got the chance.

So with Tiger still suspicious, the pair walked even deeper into the forest.

“Hello,” Fox called to a monkey that was chattering in the tree tops.  The monkey swung down to chatter at Fox, but when he saw Tiger, his eyes grew wide and his tail began to tremble, and grabbing a kudzu vine, he swung away through the trees.

Tiger thought, Perhaps Fox is fiercer than I supposed.  Still, he can’t possibly frighten all the animals and be king of the forest.

The two continued walking and hadn't gone much farther when Fox called, “Hello!” to a boar that was wallowing in the mud.  “Ugh,” grunted the boar, and looking up, he saw Fox with Tiger walking after him.  The boar’s eyes grew wide, and his tusks began to tremble, and he crashed off into the underbrush leaving a trail of mud behind him.

That is surprising! thought Tiger.  Boar is afraid of Fox.

But before he had time to wonder at the strangeness of it, Fox was greeting a crocodile sunning himself by the river.

Tiger was so shocked, he couldn't say a word, but Fox could.  Fox stood straight and tall, looked up at Tiger and in his boldest voice declared, “You see?  All the animals flee from me.  I am truly king of the forest.”

Tiger had to agree it was true, and bowing his head, he turned and left Fox to rule over his forest.

And that is how Fox borrowed the Tiger’s fierceness.
Posted by danyelle at 1:00 AM

Email ThisBlogThis!Share to TwitterShare to FacebookShare to Pinterest
Labels: danyelle